In doubt and uncertainty, in times of strife and fear, to whom do you run?

We exist in a time of constant chatter, distractions of all kinds that aim to keep us locked in attention to the external. If and when we get a few moments of inward, contemplative silence, it is immediately filled with worries and anxieties, oftentimes about personal things like our finances, our marriage, our kids. Other times we worry, and rightly so, about the world.

Fear can be a good teacher, but a dangerous master.

When anxiety becomes my modus operandi, I feel it in my body (most notably, with heart palpitations and tension), but I also take this anxiety into everything I do, how I interact with the world. Our culture itself is in a continuous fight or flight response, and the mechanisms of this cultural machine keep us exhausted, unable to take our focus away from the demands.

I long for silence.

If you get beyond the “God” and “He” references, you scratch the surface that there is something powerful in this. It is to say, we are NOT the programmed worrisome, anxious creatures we believe ourselves to be, but that we have that original capacity of stillness, of silence. Yet, we veer off into the elsewhere of distractions and addictions.

In other words, we are responding to (and collaborating with) a movement away from Life in obedience to industrial civilization. But it doesn’t have to be this way. The justification of a mad world is that humans are just full of greed and brutality. Many of us accept this, to integrate it into our being so that we cannot even trust ourselves.

This is the ultimate lie.

When we allow ourselves to leave the distractions, we come to our true selves in silence. This desire for stillness often happens through adversity – when we are desperate the eyes open and we begin to see.

We come to our full attention when we listen, deeply listen. Listen to the ancestors, to other beings like birds and snails and moss. Listen to canyons and rivers. Listen to the truth that precedes us, that essentially is our Source and true nature. 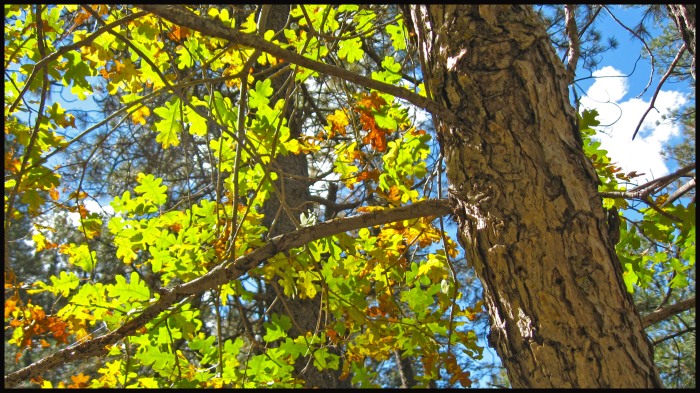 As an October baby, I have always loved autumn.  Growing up in Southern Indiana, with its poplar, redbud, walnut, and dogwood tree-covered hills, I naturally seek out places in Arizona similarly rich with plant diversity, and especially this time of year.

For those of us living in the desert, it’s necessary to adjust the senses for less garish autumnal finery. Those gilded colors I came to expect in October are hidden in washes and dry creek beds… with the remnant deaths of monsoon wildflowers, strewn against sand and cobble. The drift of fallen sunflowers and wine-hued amaranth fills the roadside ditches. And, the unexpected glance out toward the Estrella Mountains, where the wide Gila flood plains curve under the trunks of gold-trimmed Cottonwoods, conjures up nostalgia.

But, yesterday I needed the symbolic autumn of my youth, the overt heralding of change. Yesterday, I needed canyons. 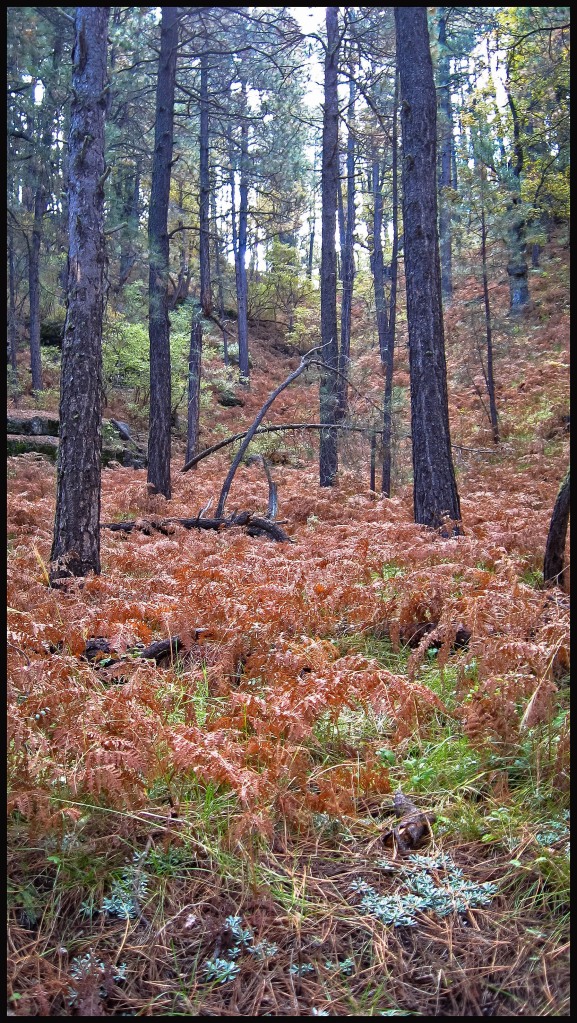 So, a friend and I set out to explore one of myriad canyons of the Mogollon Rim, a massive escarpment of limestone and sandstone that defines the southernmost edge of the Colorado Plateau. This is an area rife with deep canyons that spider out and create enormous gorges. The views are so easily lost to bewilderment. With its maze of ponderosa pine and rock, the imagination ponders how easy it would be to descend into one of those unnamed canyons and never be found again.

Our hike, however, led us to one canyon in particular… small in scope and challenge, Pivot Rock Canyon was the perfect choice.

Not really in the mood for thrills and chills, I sought a hike that would allow time for contemplating, tree-gazing, adorning the hair in yellowing oak and scarlet wild geranium leaves and burnt orange fern tendrils. The pace of this hike: easy-going… I’d find its description online, “…good for kids and dogs.” It is a daydreamer’s place, a small, wet capillary in the pulse of an otherwise dry pine body.

Starting out on an old jeep trail, we meandered through a natural park… there, some of the oaks and walnuts had begun to change their hues and a few hallowed aspens danced in pale yellow. The ground was wet from the evening’s rainstorm… the air smelled of fungi, decaying leaves, pine resin… and it was HEAVENLY.

With my eyes fixed on the canopy above, I could have remained – lost for hours, just lying on a blanket spread on the musty, rich earth, breathing in the leaf-rot as if it could be the finest, most sensory-stimulating perfume.

Felled trees arched trunks and broken branches, downward… everything moved in the direction of slope and cliff, boulder and ridge. I, too, felt as though I had succumbed to the fall. A fall.

It is true. I had taken a rather hard fall recently, one that shook the roots and left me feeling like the only direction would be down with the drift, the torrent of summer storms, bashed and bruised – as any living thing – an instrument of greater change.

In autumn, the earth wears its mask of jewels. The harvest is a time of celebration, but only because we know what is around the forest bend – the dark nights that are closed to growth, the severe “Do not disturb,” the fin of the final reel. It doesn’t matter what yesterday’s intention was. It matters not what was felt. Now is the time we near ourselves to the ticking of choice. Accept or not. That is the inevitability of ends. 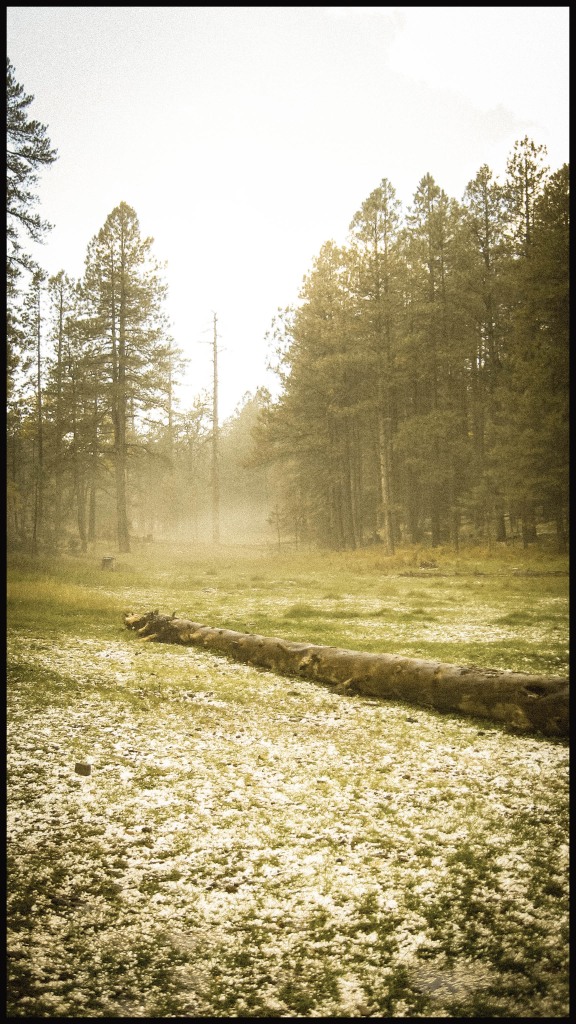 Looking out across a meadow park, my friend and I come upon a stand of massive oaks and the last of the season’s mullein. The quickening wind moves between thoughts and occasional words. It’s important to hike with those whose need for silence matches your own.

At the end of the canyon, the remnants of an old concrete cistern attest to a once active spring. Above us, the faint hum of motorists along Highway 87 snake their way between destinations. This was not to be a long journey. The canyon, though tangled and wild, ends abruptly after a few miles, joining up with its sister canyons along the splintered map of the plateau’s vast rise.

Canyons have a way of leading us along one adventure, only to dash our hopes with a sudden wall of tumbled rocks, then forcing us along on a different course. The dictates of its severe angles, weather patterns, movement of water…  There is a beginning and end. There are lost trails, twisted ankles, water too deep to avoid.

But, this journey was forgiving and I made peace with the hopeful wishes of being human, of falling against those hard edges and angles I was not prepared to meet. I breathed it all in. I took a last look at the shivering leaves, still beautiful beneath the afternoon sun.